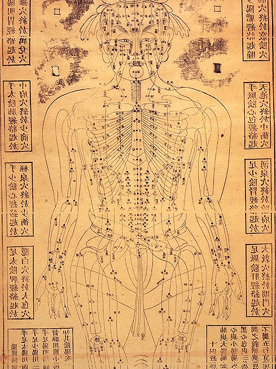 With a historical record stretching back some 2000 years, and spanning many cultures and continents, understanding acupuncture can be confounding to patient and practitioner alike. It is one of the oldest and most widely used medical practices in the world, yet it was only in the 1950’s that so-called “Traditional Chinese Medicine” was systematically organized by an emerging modern Chinese state. Increasingly, Traditional Chinese Medicine exists side by side with Western medicine in an integrated health care system.

While the mechanisms of acupuncture are not completely understood, research demonstrates acupuncture's effect on the limbic system in the brain and it is known that levels of neurotransmitters such as endomorphin-1, beta endorphin, encephalin, and serotonin increase in plasma and brain tissue with acupuncture. Other research seeks to explain a biological basis for the local effects of acupuncture. And the work of such vanguards as Mae-Wan Ho challenges our very understanding of biology, and how this squares with our understanding of modern acupuncture.

Acupuncture in the USA

Acupuncture began to enter into the broader public awareness in this country in 1971 when James Reston, a New York Time’s reporter, had to undergo emergency appendectomy surgery in Beijing and published an account of how Chinese physicians eased his post surgical pain with acupuncture. This article was the first time many Americans had heard of traditional Chinese medical practices. Since then Chinese medicine has caused great interest in the United States and has continued to evolve.

The first licenses to practice acupuncture were issued by the states of Oregon and Nevada in 1973, and the first acupuncture school in the country - the New England School of Acupuncture - was established in 1979. Acupuncture was not a licensed profession in Texas until 1993.

In 1997 a Consensus Development Conference sponsored by the National Institutes of Health and several other agencies concluded "there is sufficient evidence...of acupuncture's value to expand its use into conventional medicine and to encourage further studies of its physiology and clinical value", and in 1998 Congress established the National Center for Complementary and Alternative Medicine.

In 2003 the World Health Organization published Acupuncture: Review and Analysis of Reports on Controlled Clinical Trials which lists over two dozen disorders proven to be treated effectively with acupuncture, and many more for which therapeutic effect has been shown but further proof is needed.

According to a 2006 National Health Interview Survey, approximately 3.1 million adults in the United States used acupuncture in 2006, representing a 30 percent increase over the 2002 estimate - but still only about 1% of the population.

The Society for Acupuncture Research