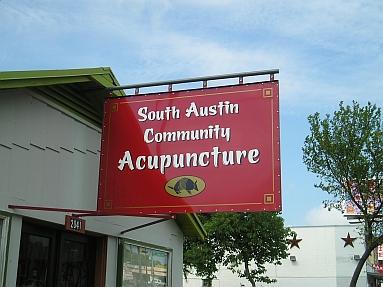 The story of South Austin Community Acupuncture is a story of the love and support of all those who have made this most heartfelt and magical of endeavors possible over the years.

My background is in music, and although I was too young to catch the heyday of South Austin’s famed Armadillo World Headquarters, as fate would have it, I wound up performing with many individuals who were of the Armadillo generation. Between hearing recordings as a youth and these later life experiences I always felt a thread of connection to the place.

And so, with our domain name acupunctureworldheadquarters.com (Kelly's idea) we pay homage to a time and place that in many ways put Austin, Texas - and particularly South Austin - on the map culturally. The Armadillo also represented a coming together of people of all kinds, with hippies and rednecks co-mingling happily. The draw then was music and beer. Here we offer the perfectly sublime combination of the La-z-boy recliner and acupuncture. The emphasis on diversity and inclusion remains the same.

Circulating in all kinds of circles of music making over the years in Austin, in part, made me who I am. And those many circles of community certainly played a significant part in making this clinic what it is today.

As a fledgling micro-business, it did not hurt that my partner Kelly is a CPA by training. She came to Austin to work for Dell Computer Corporation, which promptly motivated her to find another path forward in life, which is what ultimately led her to acupuncture school.

When I decided to go to acupuncture school, I was working at a small upstart biotech company called Ambion running the shipping department and playing drums with Gary P. Nunn (of ‘London Homesick Blues’ fame). I was also getting some acupuncture and studying Golden Shield Qi Gong at a school Dr. Dongxun Zhang of China Health Center had set up. Dr. Zhang, Robert Marion, Praveeta Rose, and Ward Tummins all played a seminal role in informing my decision to pursue studies in acupuncture.

I had concluded that the work I was doing at the time – running a shipping warehouse and driving around in a van with a band – was not where I wanted to be in a decade. I finally made the leap after one of the scientists at Ambion came to say goodbye and informed me she was leaving to go to acupuncture school, followed in close succession by the woman who sold me shipping boxes doing the same. The writing was on the wall. I quit my job and began studies at the Academy of Oriental Medicine Austin in 2000.

Thankfully, I had Allen Cline for a teacher early on in my student career and volunteered to work at his clinic, Turtle Dragon (then at its Burnet Road location). My job was to fill herbal prescriptions for herbalist Dr. Wu Peirong. Dr. Wu only spoke Chinese and worked through a translator, and I had to learn how to read the names of the herbs in Chinese. Seeing the structure of Dr. Wu’s formulas over and over, and filling herbal prescriptions day in and day out was a transformative experience. Just handling all the different herbs – touching and seeing and smelling them – really brought the medicine to life for me. Also, I liked the bustling nature of the place.

When I graduated and got licensed, I had the opportunity to work at Turtle Dragon but chose not to. I suddenly felt I was occupying space in someone else’s place of business and needed to find my own way. Initially, I set up shop in my small house next to The Herb Bar on Mary Street. It was then that I began in earnest plotting the course for opening a clinic

My vision for a clinic was informed by two things: my commitment to my South Austin neighborhood and community, and the experience of working in a bustling clinic. It happened like this...

I came across a post in an email forum written by someone who had been in the profession many years. It was pretty gloomy stuff, asserting that most acupuncturists fail within the first five years of being in business. In response, someone else responded that this was nonsense, and that everything you needed to know about marketing an acupuncture clinic was available virtually for free online. I was roughly aware of what was out there, most of which seemed to consist of positive thinking and ridding oneself of any vestige of a scarcity mentality. But after reading that email thread I typed the words “acupuncture marketing” in my search bar and began digging. A few pages into my search, it happened. I stumbled upon Working Class Acupuncture in Portland, Oregon – the mother ship of community acupuncture clinics. It was as if the heavens had parted: Charge less. Treat in a group setting. See more people. More people can get acupuncture. They can get more acupuncture and get better results. They tell more people. You see more people. It is a virtuous cycle.

I was absolutely blown away by Lisa Rohleder’s ebook ‘Love Your Microbusiness’ (now available as an appendix to 2017's 'Acupuncture Points are Holes') and picked up the phone and immediately called Working Class. Lisa called me back. I called Kelly – now my wife – and told her what I had found. Initially she thought I had lost my mind, but next thing you know we were on our way to Portland to pay a visit and see community acupuncture in action. Working Class Acupuncture had been so inundated with acupuncturists coming to see what they were doing that they had to begin formal trainings in community acupuncture. Kelly and I wound up being the last of the drop in observers. From these early days emerged what is now the Peoples Organization of Community Acupuncture and POCA Tech, a school to train acupuncturists in community acupuncture specifically without incurring student loan debt in the process.

I had known I wanted to do something community oriented, but it was not until discovering Working Class that all the pieces fell into place. I had been working on a business plan and scouting for a location, but I was still oriented towards charging what the market would bear – as was taught in acupuncture school. Community Acupuncture turned all of this on its head, and it made great sense to me.

We signed a lease at 2041 South Lamar and opened our doors for business in November 2006. A lot happened along the way to get us to that point, and I must give credit where credit is due. There would be no South Austin Community Acupuncture without the gracious support and tenacity of the likes of Wallace Hawkins.

I knew Wallace from back in the day when a band I was in would open for Michael E. Johnson and the Killer Bees, with whom Wallace played trombone and keys. One day I ran into Wallace coming out of the Herb Bar on Mary Street. We got to talking and ultimately Wallace agreed to help me get the building we had rented whipped into shape. He knew we had no money and agreed to help me in exchange for acupuncture. It was by sheer force of will, a lot of sweat equity, a credit card, and just enough money for the first months rent and a deposit that we got this thing off the ground. 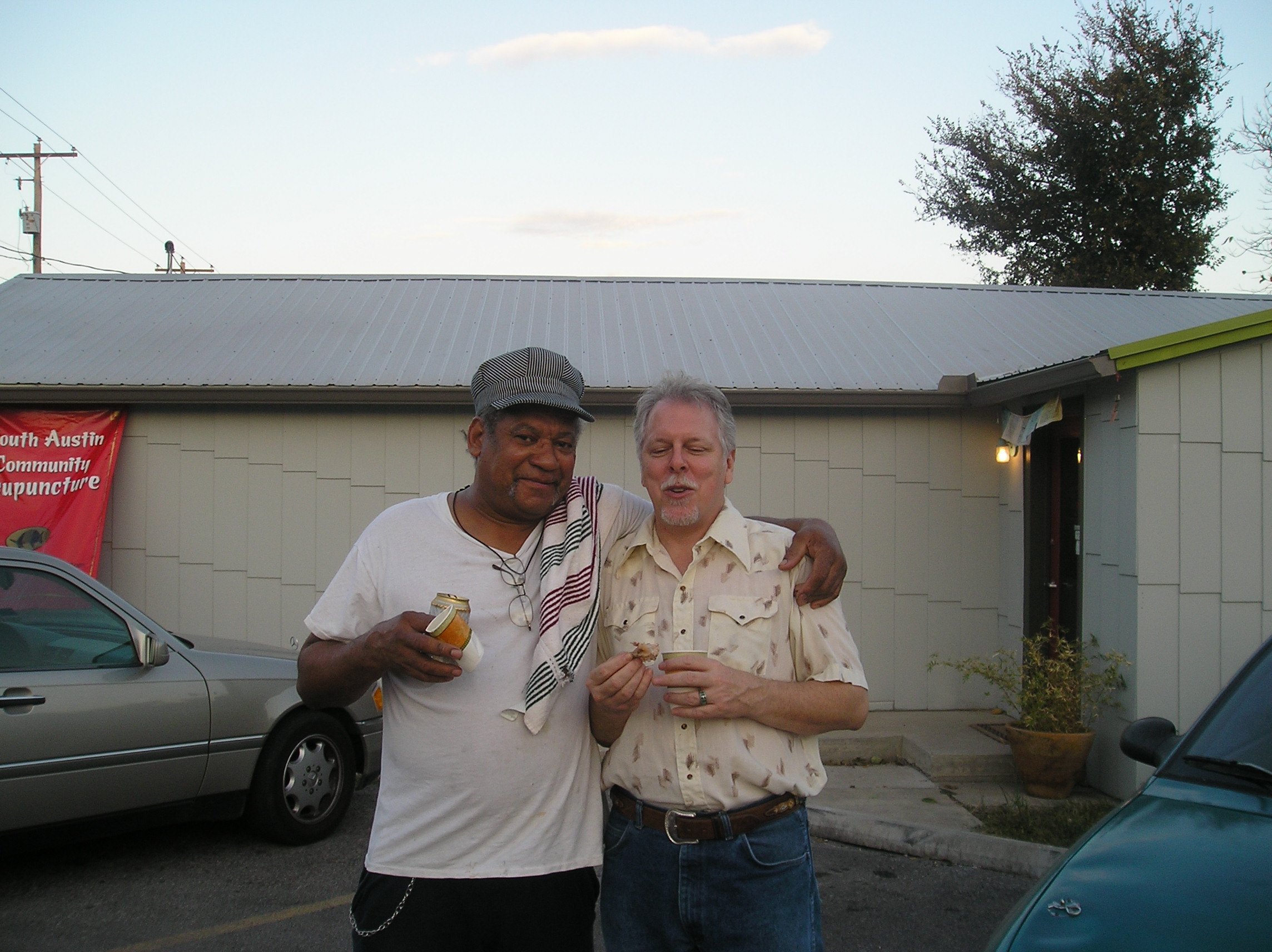 Singer/songwriters Michael Fracasso, who lived around the corner from me at the time, Jimmy Lafave (with whom I had begun playing while in acupuncture school), and my friend Lisa Richards played our grand opening party. At one year, we celebrated with friends and patients, members of the acupuncture community, and music from former bandmates Stop the Truck. Haikam and Danielle from San Marcos Community Acupuncture came out. We had a miniature horse for the kids, and jerk chicken and rice and peas courtesy of Wallace. And the esteemed Mike Sobin began working for us around this time, who ultimately went on to establish Louisville Community Acupuncture. Good times... 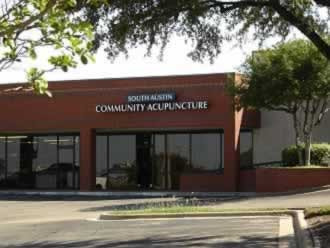 After an arduous exercise in how not to do commercial real estate rental, we relocated to our 321 W. Ben White Blvd. location. I figured if we could survive our first landlord and all the demolition and construction that went on around us for much of our tenure on South Lamar, we could survive anything. I never dreamed of landing in a strip mall, but the space had virtue. Despite being located on the Ben White access road, it was actually pretty quiet and there was a nice view of trees and the Penn Field water tower. And again, we created a magical little space. We kicked off this location with Conjunto Los Pinkys providing the entertainment at our re-grand opening and have put in a good solid decade of life and work from 2009-2019.

So much has happened in that span of time: Wallace Hawkins passed in April of 2009. Kelly and I moved out of the Bouldin neighborhood, bought a house in the '45, and got married. Mikey moved to Louisville and got married. Erica Chu, LAc. held forth at the clinic until she moved to San Antonio and got married. Christanne Spell showed up and took Erica's place until life and motherhood led her away. My mother, Georgia Doggett, passed away at the age of 95 in 2013. And Jimmy Lafave succumbed to a rare and aggressive form of cancer and passed away in 2017. Our old South Lamar location has been leveled to make way for new development.

Bringing it all back home...

In February of 2020 we moved the clinic to Cherry Creek Plaza at the corner of Stassney Lane and Manchaca Road (Now Menchaca Road). This brings the clinic into the 78745 neighborhood we have now inhabited for over a decade, mere blocks from home - and we will double our footprint. This has been an extraordinary undertaking, involving scores of individuals to bring into being. Thank you all who have brought us to this point.